Today, Adelaide pop-punk duo TOWNS reveal their latest EP ‘things you might feel sometimes’ out now via Farmer & The Owl/BMG.

Raw, honest, and straight from the heart – ‘things you might feel sometimes’ delivers seven tracks true to the duo’s hook-infused blend of 90’s pop-punk and Australiana they’re trusted for, whilst introducing both a softer side of their sound as well as a true punk track. The melodic yet mosh ready melting pot of genres is an authentic, sonic representation of the rollercoaster of emotions (or things you might feel sometimes) – a theme the new EP is centred on.

“This EP is a representation of the rollercoaster of emotions we all go through, positive or negative, some of them are niche and we wanted to explore them lyrically and sonically, to try and do our best at giving our fans a song to relate to in some way shape or form. Each of these songs are from our heart and were written honestly with no end goals other than to be ourselves, while these are our songs, these are also things you might feel sometimes.” Dan & Aston say of the new EP.

‘things you might feel sometimes’ features three never heard before tracks, as well as the duo’s recent singles ‘Speak For Myself’, ‘Season 5 (Break My Fall)’ and ‘98’.

Recently wrapping up an electric tour across the country with Beddy Rays, the self-professed “two-piece puzzle” are in the middle of another run of live shows across the country as part of their ‘Speak For Myself’ single tour including recent headline shows in hometown Adelaide, a weekender headline run in Melbourne at iconic venues Yah Yah’s, Hotel Westwood and Cherry Bar and in true TOWNS fashion a performance at the Pro Wrestling Australia in Sydney. The duo have no plans of slowing it down, playing Adelaide’s Harvest Rock Festival on 20 November, shows in the Gold Coast and Bunbury, and jumping on tour with Perth indie-punk favourites Sly Withers.

In 2018, TOWNS released their debut EP Television, which swept listeners off their feet from the first spin with its unique blend of 90s pop rock and Australiana.  Proving they love all things 90’s, the duo have even created a YouTube series TOWNS TV, hosting their own nostalgic TV show drawing inspiration from the ever-popular Cheez TV that captivated young Australian’s during the late 90’s. The duo has been named ‘Best Rock Group’ three years running for the South Australian Music Awards.

TOWNS continue to deliver their good-time vibes with their live shows, having joined fellow Adelaideans Teenage Joans on a sold out co-headline tour, they also hit the road for their own headline shows and supporting Ruby Fields, playing to packed out venues and bringing the high octane energy they are known for.  This is in addition to supports for Dune Rats, The Jungle Giants, WAAX, Bugs, Dear Seattle among many others. They have also been regulars on the festival circuit appearing on the bills of Yours & Owls Festival, Groovin The Moo, Falls Festival, NYE on the Hill and Spin Off Festival.

‘things you might feel sometimes’ is out now, and available on Limited Edition Marbled Pink Vinyl, or as part of an album bundle.
Listen or purchase the EP here. 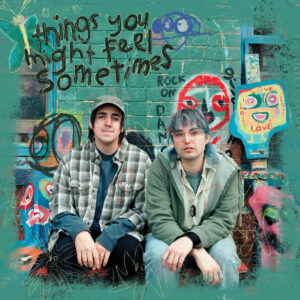